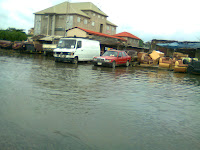 In the wake of July 10, 2011, Lagos was greeted with a torrential rainfall of about 300m that resulted into flood of about 1000mm to 1200mm. Still battling with that, the Calabar Flood struck, displacing thousands of people. All were forecasted by the Nigerian Meteorological Agency (NIMET);that became the beginning of Lagos floods and became a disaster when it claimed the lives of no fewer than 31 persons (as reported by Vanguard, July 15, 2011) including a 5year old that was drown.
Most definitely, this will not be the last of disasters we will be experiencing in Lagos, and perhaps, some other vulnerable states in Nigeria. Even as the unverified news of a 20-meter high tide tsunami heading towards the coast of Lagos, Lome and Accra, following an offshore quake in Malabo circulates round the disaster risk response world.
Consequently, We might need to ask ourselves, if we are prepared for natural disasters in Nigeria? and if we are, how fast do we respond to all these disasters, we call emergency management. With the head of the senate recently reiterating the need for emergency response managers to quickly and hastenly develop disaster response techniques – Perhaps, its time to take a cue from the Haiti Earthquake, the Negris Cyclone, the Alabama Tornadoe, the Pakistan Flood, and the recent Japan Earthquake.
Analytically, the world is changing, and we now live in a “state where a traditional framework and several experimental approaches existed in parallel — a period when the explanatory power of the old system wanes while some inchoate new system explores and codifies the methods that are strong enough to begin replacing the old ones” as Thomas Kuhn defined Paradigm Change in the Structure of Scientific Revolutions. The working tools that are now been deployed before, during and after disaster is the growing Virtual Technology Communities (VTCs) that we call “humanitarian technologists”.
These new breeds are experts who are most often technical professionals with deep expertise in geographic information systems,mapping, web development and database management, social media, and/or online campaigns – they apply their skills to some of the hardest elements of disaster risk communities. They include the international Network of Crisis Mappers, Google Map Maker, Ushahidi, The Global Earth Observation – Catastrophe Assesement Network (GEO-CAN), The SBTF ( Stand by Task Force), Crisis Commons, Random Hacks of Kindness RHoK.
Quite notably, is the fact that VTCs will never replace the current institutional
frameworks of Nigerian Meteorological Agency(NIMET), National Emergency Management Agency (NEMA) and its state agencies,and other humanitarian organizations, but crisis response and other elements of the disaster risk management cycle are approaching a state resembling a shift in paradigm. It is pertinent for these organizations to start bulding capacity in this vein, and look for ways to collaborate with professionals that uses this technology, those in Nigeria and in diaspora. Because the penetration of Internet and Mobile Technology is escalating everyday in our Country, it will be a shift to a new direction to leverage on their potentials, for which these new technologies are been used.
ShareTweet